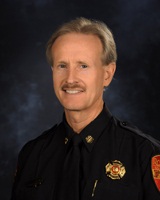 Mike Blackmon is the Fire Chief for the City of Rock Hill, South Carolina. Mike has served as Fire Chief since April 2002. He started with the City in October 1977 as a Firefighter. Mike was promoted through the ranks of Firefighter II–1985; Driver Engineer–1989; Captain–1993; and Battalion Chief–1994.

He is certified in Fire Service Firefighting, and Fire Service Technology through the SC State Academy Board of Technical and Comprehensive Education. Mike is certified as an Advanced High Level Rescue Instructor with the SC Emergency Rescue College and SC Midlands Technical College.

Mike and his wife, Allison, have three children --- Chase, Chapman and Maci.
Return to full list >>